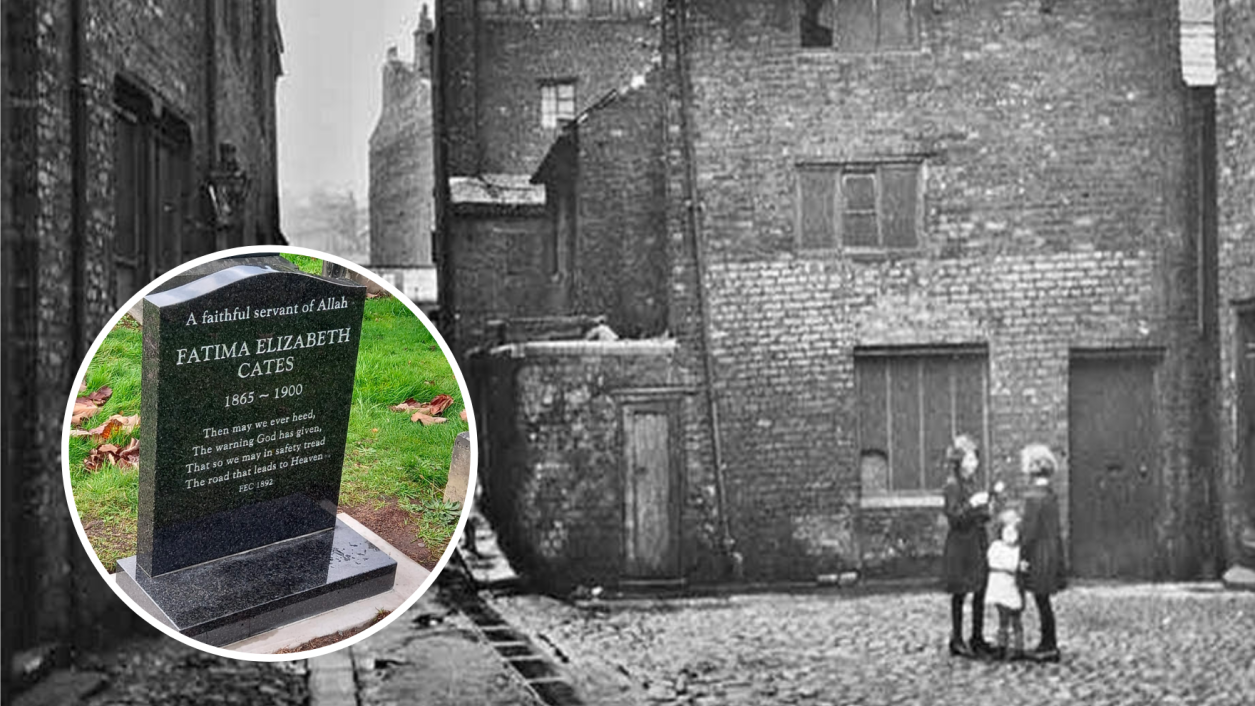 Whilst the name Abdullah Quilliam may sound familiar, the name Fatima Elizabeth Cates is new for many of us. Until recently, her story had been forgotten almost entirely, despite the legacy she left behind.

Thanks to the efforts of several individuals, her story has now found a place within the narrative of Victorian Muslims. Naming his school after her name, Hamid Mahmood of London went on a mission to locate her unmarked grave. The grave was located eventually after which a new headstone was erected using funds raised by Sister Amirah Scarisbrick.

A convert just like Fatima Cates, Sister Scarisbrick of Liverpool has a deep and sincere love for Fatima Cates. To revive Cates’ story, Scarisbrick often lectures and sings at schools and mosques in front of live audiences.

Fatima Elizabeth Cates was a gem of her time. At a very young age, she converted to Islam under the guidance of Abdullah Quilliam. At the time, Quilliam was leading the way in propagating Islam in Victorian Liverpool. Despite the many challenges and hurdles involved in being a Muslim, as well as her young age, Cate’s conversion was a courageous decision.

Before she adopted the name Fatima, Cates was known as Francess. Born in Liverpool, she grew up against alcohol and eventually became the secretary of the Association of Prohibition of Alcohol in Birkenhead.

After being inspired by one of Quilliam’s discourses, Cates found herself immediately intrigued. As she was already questioning her faith, Quiliiam’s talk gave impetus for a new search for the truth. Astonished by what she heard, much of what Quilliam discussed helped Cates in finding a more clear and balanced understanding of Islam.

H. Mustapha Leon of The Crescent made mention of her situation at this particular moment.

“During the progress of the lecture the lady evinced the greatest interest in what the speaker was saying, and, whilst the lecturer was being heartily applauded at the conclusion of his address, she happened to turn to Bro. Ali Hamilton and remarked, ‘I never knew that Muhammadans were teetotallers. I should like to know something more about their religion.‘”

She eventually did get into a conversation with Quilliam which involved asking him several questions about Islam. Gifting her a Qur’an, he prompted her to find the answers for herself. Things were tough for the young lady at home, as her mother grew more hostile towards her after realising she had a copy of the Qur’an. “I escaped to my bedroom and locked myself in, and went on reading what I now consider the most precious book that could be bought,” she said.

After much investigation and research, Cates became the first documented woman to convert to Islam under Quilliam’s guidance. She adopted the name Fatima and secured a position as a treasurer for Quiliiam’s organisation.

Facing Abuse From Her Community

There was no doubt that this invited a wide range of problems. From smashing windows to being ridiculed, it is even recorded that horse manure was rubbed in Fatima’s face. Whist the hostility continued with her mother’s mockery of Islam, Cates’ husband and two sisters were influenced to enter Islam. However, several years later, Cates filed for divorce from her husband after suffering from domestic abuse. It was rather uncommon for women at the time to file for a divorce, but Cates was brave to speak up against such a matter at a time when most women couldn’t.

Fatima became a mother to a boy in 1896, but she was not destined to be a mother for long. On the 24th of October 1900, Cates fell extremely ill with a severe cold. At the time, she was believed to be suffering from influenza. Nothing more. Things worsened by Saturday the 27th but got much better the next day. However, on Monday 29th, things worsened again, because of which Quilliam was at once called over. After requesting him to look after her son and conduct her funeral, she raised her right index finger, uttered the kalima and breathed her last. She was only 35 when she passed away.

H. Mustapha Leon was a key figure when it came to documenting Cates’ eulogy. In what could only be described as a masterpiece, Leon eloquently and brilliantly summed up her entire life in his article.

“It is our melancholy duty to announce the somewhat sudden demise of one who took a very prominent position in the early propaganda of the Islamic cause in England, namely, our Sister Fatima Elizabeth Coates.”

The story of Fatima Elizabeth Cates is nothing short of inspirational. Now that her legacy has been brought to the surface, it is advised that educational establishments, mosques and media platforms continue reviving her narrative. After all, Cates managed to accomplish a great deal, despite being a victim of domestic abuse and being ridiculed for her new faith.

+ posts
Juber Ahmed is our Digital Editor and travel enthusiast with a keen interest in Islamic history and heritage. He travels with his wife to various places around the world and writes about his experiences.
Juber's favourite Quote...
"The World Is a Book and Those Who Do Not Travel Read Only One Page" [Saint Augustine]
Tags: abdullah quilliam, british muslim, british muslim magazine, Fatima cates, Fatima Elizabeth cates, Liverpool mosque, victorian muslims

What do you know about traveling to Algeria?
No comments

Finding that perfect lampshade from Amara
No comments