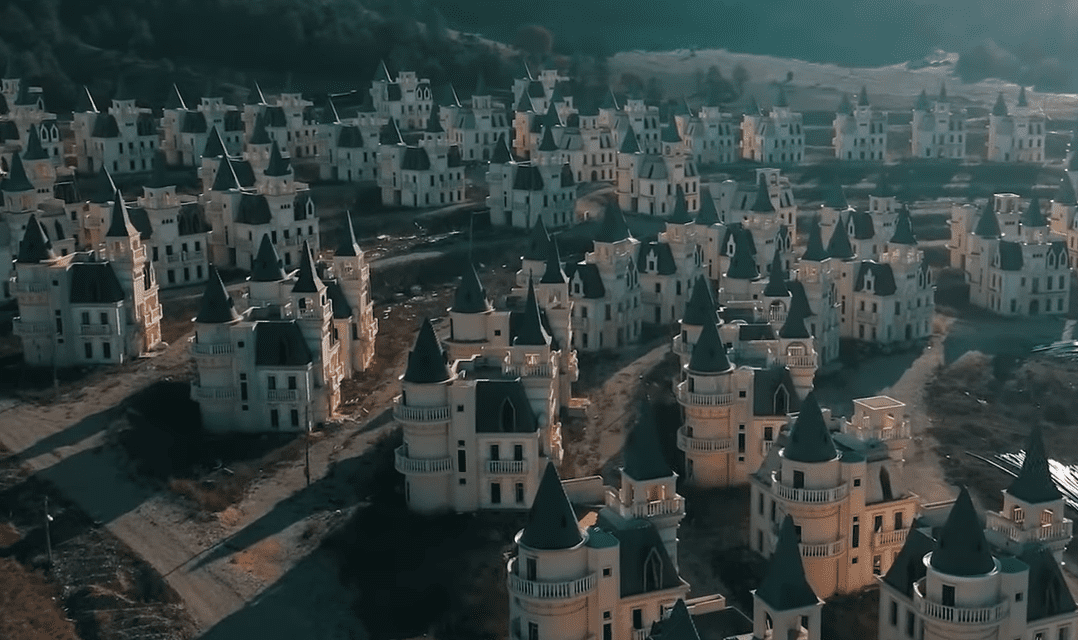 Hidden away in the region of northwestern Turkey lies the small town of Mudurnu. There’s no reason to visit Mudurnu except for one peculiar site; Burj Al Babas. Burj Al Babas is the perfect example of a property development project gone wrong! Home to fairytales castle taken right out of Disney films, the multi-million dollar project was initially planned to bring in more tourists.

The area still gets tourists, except that most of them are not there to unwind and vacation. These visitors are looking for off-the-beaten-path locations. With Burj Al Babas home to hundreds of abandoned brilliantly constructed luxury houses in the shape of castles, Burj Al Babas is referred to by many as the world’s most legendary ghost town!

Whilst the castle-like houses are beautifully designed, there’s just something eerie about them as they’ve been left abandoned. It’s rather odd to think about this place populated with tourists as the roads are unfinished and many houses are open and free to explore.

Why Were They Constructed?

The intention was simple; to bring about tourism. Whilst the site was intended to attract millions from around the world, the developers had a specific target audience; residents of the Persian Gulf. According to Bloomberg, the plan was to sell each one of the houses to wealthy visitors at prices of around $370,000 and $530,000. With homes equipped with jacuzzis and modern heating and the area home to cinemas, hammams, a shopping centre and a mosque, the site was intended to be a home for many rich Arab clients.

How Did It End Up Abandoned?

Although things started off great in 2014, the property development project took an unexpected turn. With financial restrictions and Turkey’s continuous economic crisis, the project was called off in 2018. The plan was to construct 732 castle-like houses, but only 583 were completed.

More Than a Castle-Like City

Located between Istanbul and Ankara, the site was intended to be a popular tourist spot. With a pleasant climate and scenic surroundings, the plan was to construct entertainment centres, multiple shops and Turkish baths.

What’s The Plan For The Future?

Back in 2018, developers made plans to resume work in 2021. Of course, this didn’t exactly pan out as intended and the site is still stuck in limbo. But they haven’t lost hope. Developers are now planning to resume the work and transform this abandoned site – home to only cats, dogs and a few tourists – into a thriving and bustling tourist destination. When will this happen exactly? Well, there is no confirmed date, unfortunately. For now, it may be worth visiting whilst it possesses this spooky and eerie ambience. Although there are no guided tours, tourists are free to make their own way and explore the site.

+ posts
Juber Ahmed is our Digital Editor and travel enthusiast with a keen interest in Islamic history and heritage. He travels with his wife to various places around the world and writes about his experiences.
Juber's favourite Quote...
"The World Is a Book and Those Who Do Not Travel Read Only One Page" [Saint Augustine]
Tags: ankara, arab, bloomberg, burj, burj al babas, castle, cinemas, disney, Istanbul, jacuzzis, mosque, mudurnu, persian gulf, shopping centre, tourists, turkey, turkish bath

The Forgotten Legacy of The Victorian Muslim Convert: Fatima Elizabeth Cates
No comments

Activities to keep your toddler entertained
No comments

Beyond Bollywood at the London Palladium
No comments