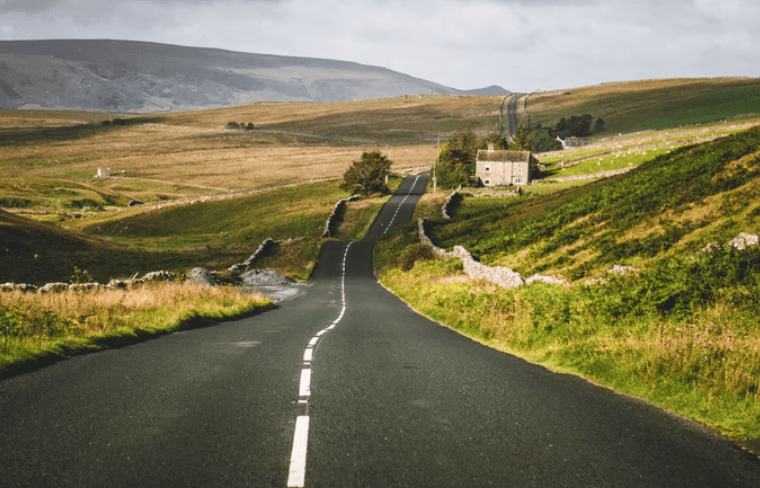 Who doesn’t love a drive in the countryside of England? There’s no denying that going for a drive along a road that stretches for miles with picturesque views is one of the best ways to unwind and appreciate the landscapes. What’s more, with longer days, you can take advantage of these routes in the early hours, in the late afternoon or in the evening to catch the perfect sunset.

Located between Manchester and Sheffield, the Snake Pass driving route offers superb views of the Peak District. The Snake Pass is basically a mountain pass and sits 1679ft above sea level, allowing your drive to consist of exceptional sceneries. Starting from the town of Glossop, the road passes through the countryside – like a snake with its windy roads – and ends at Ladybower Reservoir’s Y-shaped valley. If you’re after awesome views, blind summits and road bends like you’ve never seen before, Snake Pass is the route for you.

If you’re looking for a quicker route, head for the town of Holmfirth. Starting there, drive through the villages of Holmbridge and Holme. Being a more laid back route, you can stop at the Holme Moss Transmitting Station for inspiring views of Kirklees and Huddersfield. With testing bends and twists, the Holmfirth to Woodhead Reservoir is a great option for those looking to avoid auto-pilot driving.

Whilst Hull may not be the most exciting place to visit, its Humber Bridge – which was once the world’s longest single-span suspension bridge – is an engineering marvel. Opened in 1981, the bridge stretches for 1.4 miles and takes drivers from East Yorkshire to Barton upon Humber. Once on the bridge, drivers can get great views of Hull and the surrounding area. Although there is a small toll charge to pay, drivers will agree that it’s worth every penny.

Did you know that the bridge is the longest in the world that can be crossed by cycle or on foot?

This one has been voted as one of the best by Top Gear and AA! That should tell you a thing or two about this route. Apart from when it snows, it really would be a shame if this road is missed. Starting from Penrith in Cumbria and connecting with Haydon Bridge, you’ll find some fascinating heritage sites and great restaurants along the way. Running for 37 miles, it takes up to an hour to complete the route. For that reason, we suggest leaving some time to visit any sites of interest along the way.

Cat and Fiddle is a name given to the route between Buxton and Macclesfield and takes its name from a pub that sits in the area. With splendid views of Greater Manchester, the Peak District and the Cheshire Plain, you can also make several stops to transform your drive into a full day out! The road has a distance of 11.1 miles and takes approximately 30 minutes to drive from one end to another. Sweeping into the Peak District National Park, the road is filled with treacherous bends and is particularly known among motorcycle drivers.

+ posts
Juber Ahmed is our Digital Editor and travel enthusiast with a keen interest in Islamic history and heritage. He travels with his wife to various places around the world and writes about his experiences.
Juber's favourite Quote...
"The World Is a Book and Those Who Do Not Travel Read Only One Page" [Saint Augustine]
Tags: british muslim magazine, cumbria, driving routes, haydon, holmfirth, manchester, north england, peak district, Peak District National Park, penrith, snake pass, yorkshire

Nina Wadia set to host BBC Radio 4’s appeal against anti-trafficking
No comments
More then 250 people have died in Grenfell Tower but whose responsible?
No comments

Set Your Wedding Budget and Stick to It
No comments