Minarets in the Mountains: A Journey into Muslim Europe 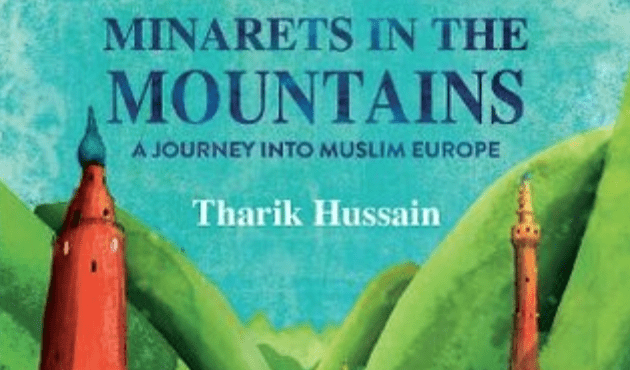 Minarets in the Mountains is a fascinating account of Tharik Hussain’s journey around Muslim Europe, accompanied by his wife and children. A former teacher and journalist, Hussain guides his reader with focus and precision as he treads across several countries in the Balkans to explore the remnants of a once Ottoman Europe. The author delights readers with descriptions of idyllic mountainous regions and makes note of the Islamic-themed architecture he finds during his visits to each mosque and its minarets. The author is a Fellow at the University of Groningen’s Centre for Religion and Heritage, and is the creator of Britain’s first Muslim Heritage trails, known as The Woking Trails and The Muslim Cemetery Trails.

The book gives detailed historic accounts of an indigenous Muslim Europe, and it is evident that the author has thoroughly researched each of the countries he visited. In line with his teaching persona, Hussain never strays from the purpose of his journey, which is to follow in the footsteps of the great Ottoman explorer Evliya Celebi. Hussain is a brilliant storyteller, who masterfully engages his reader by showing rather than telling. The reader is accompanied by Hussain on a round trip starting from Sarajevo – dubbed as the ‘Jerusalem of Europe’ – to Serbia, Kosovo, North Macedonia, Albania, and Montenegro, before once again returning to Sarajevo for a final remembrance. Accounts from each of these countries include the origins of an indigenous Muslim Europe, with enchanting illustrations of the tombs of Sufis and mystics who once graced these regions with their blissful presence.

Hussain’s book portrays a pleasing picture of harmonious communities, where people of all and no religions live side by side, socialising, engaging in mutual business and even going on to marry one another. The Ottoman Europe modelled the ideal society by taking care of its own people as well as protecting the oppressed and downtrodden. The book highlights that the Balkans served as a haven for Jews when Nazi power was in full force. One realisation kept manifesting itself in my mind while I was reading this book: it is that no nation can be truly wiped out, ever; no identity can ever be erased. In some way, like a determined flower that germinates and blossoms from the cracks of concrete, civilisations too, will inevitably return to continue their forefathers’ legacies. Even if bullets are fired, bridges are burned, and masses are murdered, the force of their undying love and loyalty will restore life, revive lush terrains, and rebuild bridges stronger than ever before.

A discernible feature of Hussain’s book is that he casts his family as memorable characters in the narrative. With the author portraying himself as the protagonist and his family as the dramatis personae, adventure is summoned at every turn of the journey. The thoughts and musings of his wife Tamara, and his daughters Amani and Anaiya bring the book to life, giving the reader a firm sense of presence in the narrative. It would have been interesting to hear more of Tamara’s thoughts and insights about the places she visited, and of what the children thought more. However, I understand this may not have fit into the scope of the book and its intended purpose.

There is no doubt that this book will entertain even the most sceptical of minds, allowing their eyes to see beyond dreadful rumours and distorted headlines at the true beauty and brotherhood of a Muslim Europe. As I approached the end of this book, I silently celebrated the enriched concepts of Komsiluk and La Convivencia and wondered whether our little Island may ever experience anything like it.

1 Day in Dubai – A short vacation in Dubai
No comments

If this was the last poem you could write to the beloved Prophet Muhammed, peace and blessings be upon him, what would it be?
No comments

Saudi Arabia has unveiled plans for an entertainment city
No comments