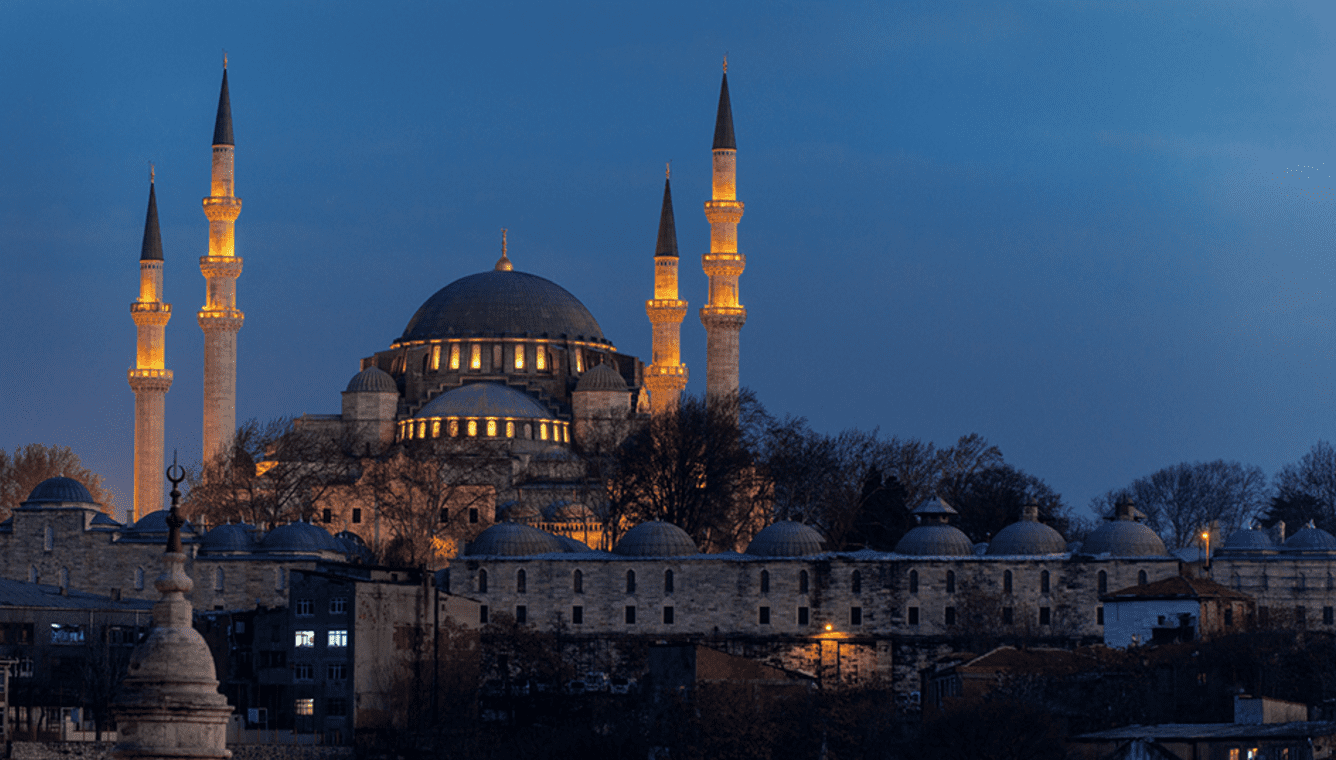 Istanbul is one of those timeless cities that you can visit, visit again and then revisit. It is genuinely modern, but wonderfully traditional; offering something for everyone, be it a quiet spiritual retreat, or a bustling city break. Istanbul itself is split over two continents, with the Bosphorous, connecting the Black Sea and Sea of Marmara, forming the boundary between Europe and Asia. In Istanbul, both of these worlds are connected, harmonious and at one, with no tension existing between the two. The result is a metropolis that offers a sense of liveliness but also tranquility.

An air of serenity follows us as we (my wife and I) walk around Sulaymaniyah, the old city in Istanbul. We start by familiarising ourselves with the old city, a stone’s throw away from our hotel. The weather is cold, but not too cold, the city is quiet, but not too quiet. There is a balance about the city. Nothing seems out of place. The city is neither religiously conservative nor, stridently secular, but has settled somewhere in between. This is particularly evident as we step foot inside Hagia Sophia, one of the most impressive pieces of architecture in the city.

Once a Church, later a Mosque and now a Museum, we enter and behold a brilliant mosaic of Christ. A few steps further and we enter the building’s main space, famous for its astonishing dome and huge marble pillars. The Islamic calligraphic roundels fascinatingly juxtapose the vivid Christian imagery, complementing each other, not at odds with each other. The names painted on the eight wooden medallions are: Allah, Muhammad, the first four caliphs, Abu Bakr, Umar, Uthman, Ali and the two grandsons of Muhammad, Hasan and Hussain, allowing an ambience of sacredness to enter into the architecture. 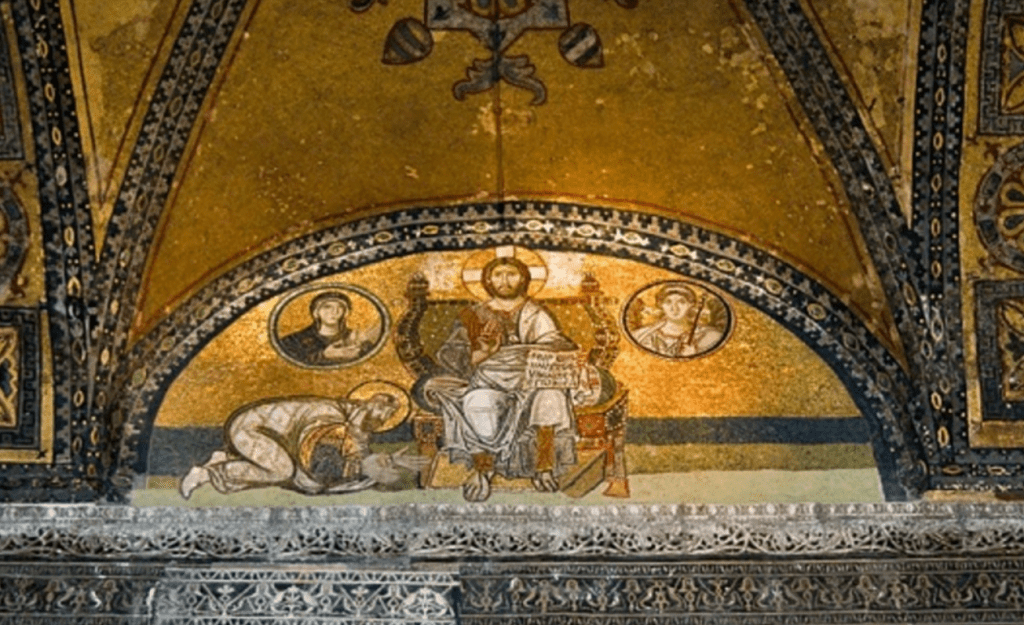 The Hagia Sophia, 1,500 years old, inspired many later buildings, including the Blue Mosque, which we also decide to visit. ‘No visit,’ we hear, ‘is complete without seeing the Blue Mosque’. Also known as the SultanAhmet Mosque, the Blue Mosque is Istanbul’s most photogenic piece of architecture. The mosque’s wonderfully curvaceous exterior features a cascade of domes and six slim minarets. Blue İznik tiles decorate the interior and give the edifice its unofficial but commonly used name. As we enter we hear the adhaan’s echoes bouncing off the city, and so we settle to pray Isha, the late night prayer, inside of the Mosque, before heading out for some dinner. We dine at a close-by restaurant, offering penthouse (suggestion ‘panoramic’) views of the old city, beautifully lit up in the evening. 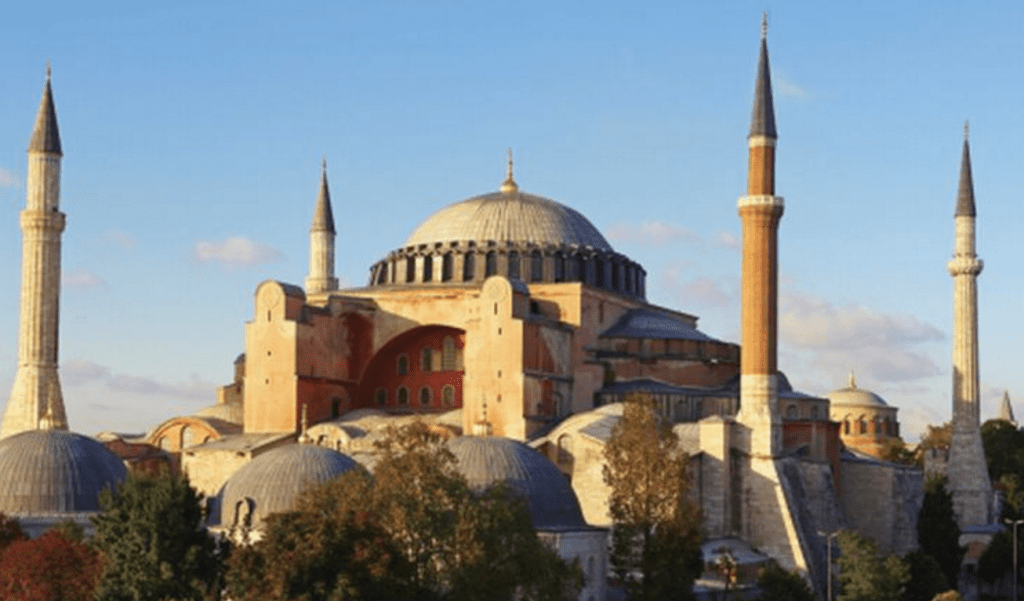 Having been to Istanbul twice previously, once on a family holiday and then on a journalistic trip, there was one place I need to revisit: the Topkapi Palace. Topkapi is a wonderful Museum, hosting a vast exhibition of astonishing Islamic relics. It can take hours to soak up all the information, so we try and find a coffee spot close to the entrance. Persuaded by the barista, we try a cup of Salep instead. It’s a delicious hot, milky beverage (no caffeine, though!) made of wild orchid powder, perfect to sip as we brave the increasingly windy weather. 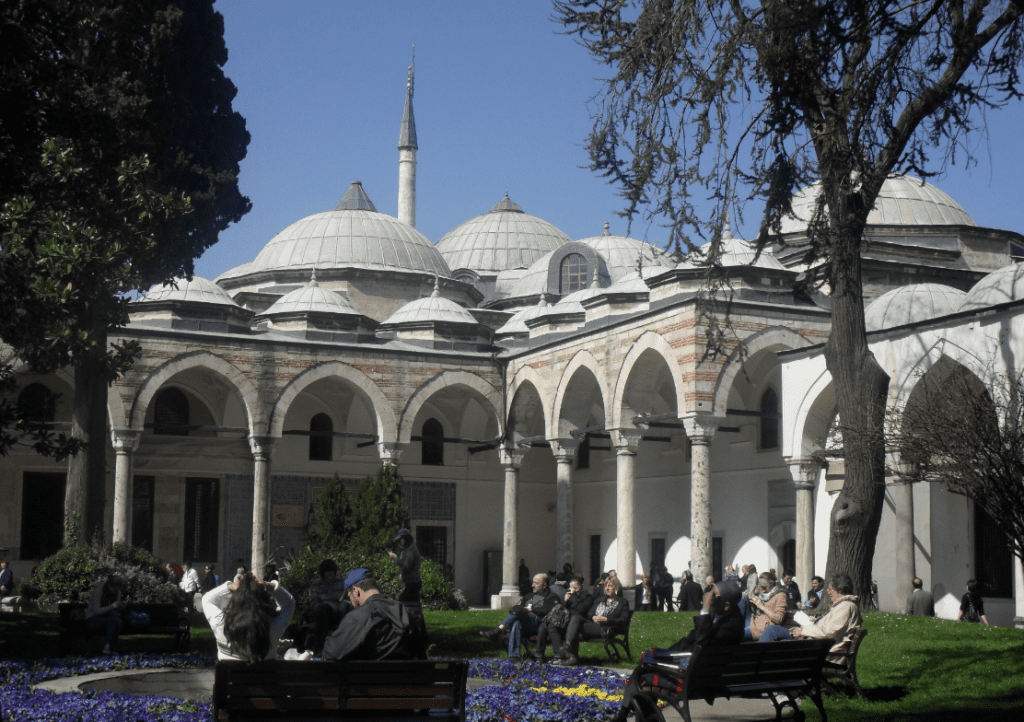 As we enter the hilltop compound, made up of four courtyards, there is a lot to be intrigued about. We spend a lot of time perusing the weaponry and clothes’ rooms and are taken aback by the size of the clothes (were the people that big, we wonder?) We come to realise that it was their tradition to wear clothes of that size (and not that the Ottomans just indulged in huge portions of food). This was the home of sultans and their harems, and everything about it is extravagant.

We then curiously enter the room that displays global gifts, given as presents to the powerful emperors who ran the Ottoman Empire. It’s interesting to see different cultures’ understanding of luxury, and we notice gifts from India are lavishly bejewelled, whereas China’s offerings are items made from precious jade. Our favourite room, however, displays the religious relics that are literally breathtaking. From a single strand of the hair of the Prophet Muhammad, to the swords of his companions and the staff of Moses, everything we perceive here is incredible and faith boosting. All this while a man, tucked away in one of the room’s corners, beautifully recites the Quran.

After a few hours of walking around, we’re tired and head back to the hotel. Naturally, we get lost and end up in a huge park with signs directing us to the Museum of Science and Technology in Islam. It may not be the most inspiring name, so a little encouragement from the guard is needed to get us inside and looking around. We’re surprised. The Museum is immaculately designed and perfect for science buffs. While Europe was mired in the Dark Ages, the world’s most advanced learning was taking place through Muslim thinkers. This Museum epitomises this. Disappointingly, the items on display are modern reconstructions, rather than the real thing, but we get a detailed history lesson of how Muslims became advanced in astronomy, art, chemistry, technology and mathematics.

Throughout our stay, we keep seeing posters for whirling dervishes plastered around the city. They all look commercialised, with a huge audience and a large stage and, if we’re honest, quite intriguing. But neither of us wants the commercialised show, we want the real deal. I get in touch with a friend who lives in Istanbul and knows the Sufi community very well, and we end up meeting her a few days later. She’s going to show us authentic Whirling Dervishes at a Sufi lodge. 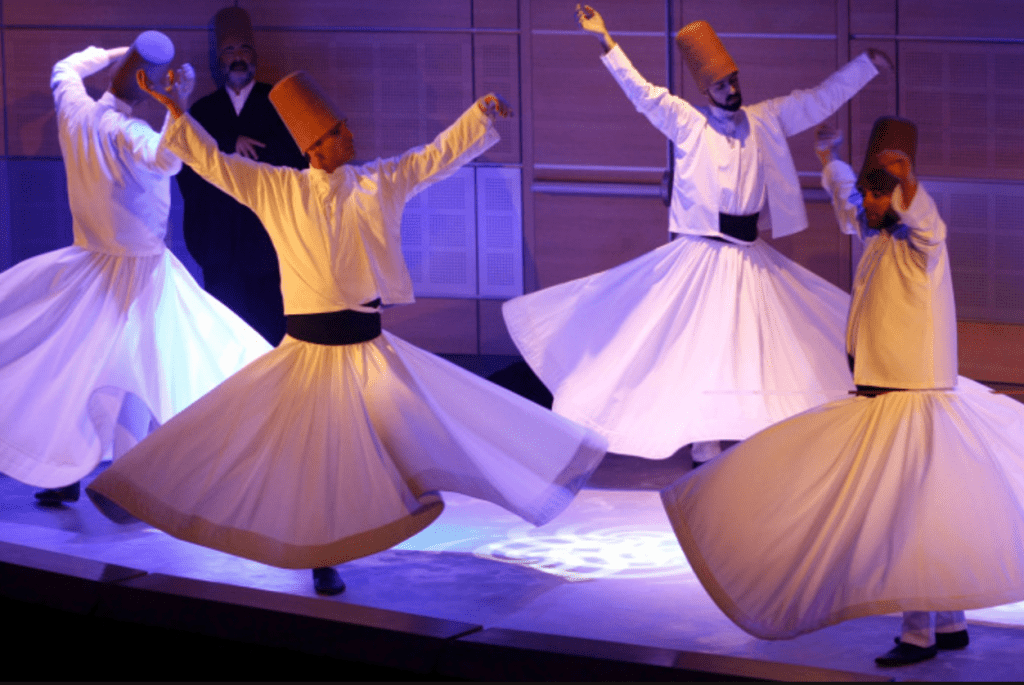 The night is perfect – it’s Rumi’s birthday. We hop on the tram and 20 minutes later arrive at the lodge. It’s jam-packed (and we’re 40 minutes early!) which is not surprising as those we are about to see performing are commemorating the birth of their 800-year-old spiritual master, Jallaluddin Rumi.

We shuffle towards the back, and are relieved when the show starts that we still able to see the stage. Men and young boys enter the room, followed by instrumentals from musicians above. They are dressed in white robes, and are accompanied by their Shaykh, a short, stout man who whispers something into their ears as they, one by one, solemnly walk towards him. They start to turn, synchronising perfectly. They spin and turn and go into a trance-like state, unaware of their surroundings. Their movements couple beautifully with the cry of the flute that accompanies their dance, and the audience are captivated. We can’t take our eyes off them.

The show is over, and we check out a local, traditional restaurant, recommended to us by our friend. “You can’t come to Istanbul without trying our Kofte,” she says gleefully and full of optimism. So we go and ask for the menu. “No no, there’s only one thing on the menu guys. Kofte!” She wasn’t joking. It’s literally the only food the restaurant serves. We sit and discuss politics, the future of Turkey and Sufism, all whilst gulping down what may be the most delicious meatballs we’ve ever tried. 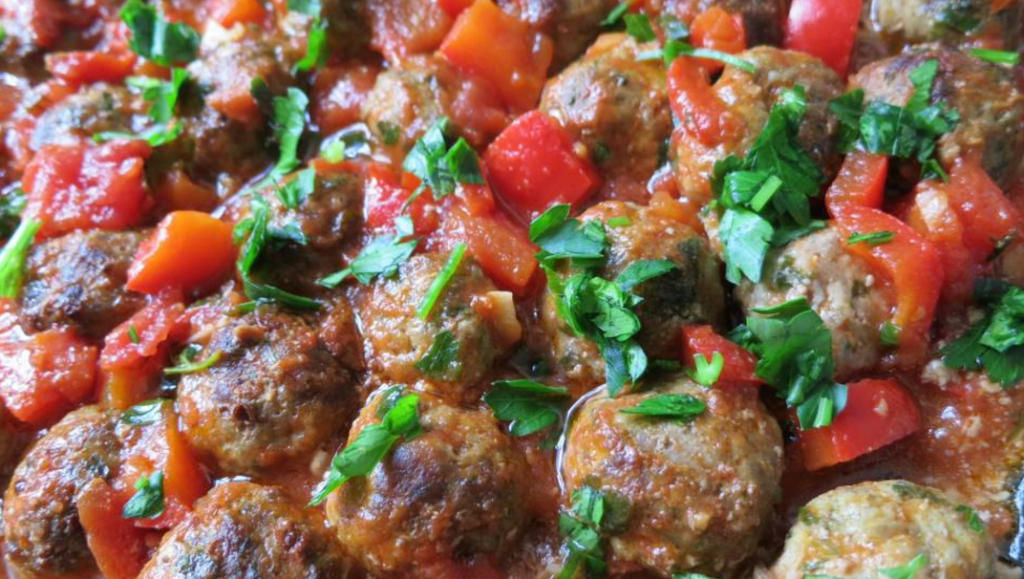 It’s the night before we head back to London and it seems as if we’ve covered it all. Souks selling the best designer replicas, huge shops serving a hundred different types of Turkish delight, sight-seeing, Whirling Dervishes, local food and Taksim Square, a popular tourist district. We realise that the only thing we’ve left out is the Hamaam. Luckily there’s one at the hotel, so we decide to check it out. We’re shown a huge marble room, and the hotel guide explains that multiple people will be massaging us in a huge, open room. “It can be quite rigorous”, he says, “but it’s excellent for your muscles and stress levels.” We look at each other, half smiling, half anxious, and decide that maybe the sauna and steam room are better fitted to our needs! Though the temperatures are set much higher than those in the UK (do the Turkish just have thicker skin?!), our trip ends on a note of reflection and relaxation.

Reflection and relaxation is what ultimately epitomised our short, but inspiring trip. Istanbul is a city you can always visit more than once. Although now, after my third visit, it may be a while before I go back, as I’ve pretty much exhausted the main sites. Since my most recent journey, however, my list of things to see has already begun to grow.

The Importance of Vitamin D – The Sunshine Vitamin
No comments

London Ramadan 2021 timetable: What time is Suhoor and Iftar in London each day?
No comments

Seven Unmissable Things To Do in Al Ain: The Garden City of UAE
No comments

Travel Fragrances for her
No comments