Northumberland is a wonderful county to explore 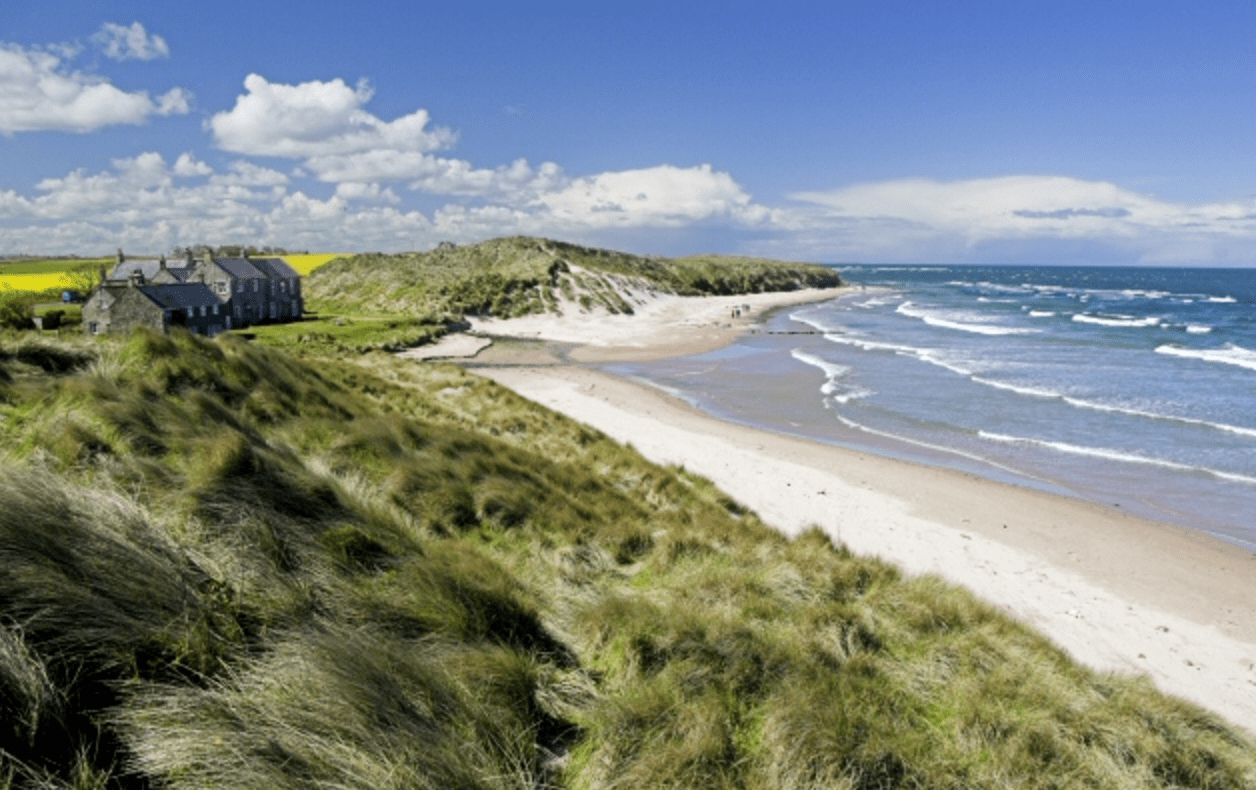 With vast expanses of moorland, forests, historic houses, pretty towns and a stunning coastline with golden beaches, Northumberland is a wonderful county to explore.

Alnwick is undoubtedly one of the most popular sites. A small country town, dominated by a fairytale castle.

Many local people still remember going to school with Harry Potter for this was where many of the most iconic scenes were shot.

The Flying Ford Anglia landed amid the Whomping Willow in the courtyard, Harry discovered the joys of riding a broomstick and Neville Longbottom had a less than pleasant ride amongst the rooftop statues.

Nowadays, giggling bands of children and adults take part in broomstick classes, as well as listening, enthralled, to costumed guides telling stories about the filming.

This is no ruined castle – it is a living, breathing castle that is home to the Duke and Duchess of Northumberland.

The fairy tale wedding dress of their daughter is on display in the Great Hall, and the glittering carriage that took her to the church can be seen in the Mews.

An incredible array of weaponry is displayed on the walls, along with priceless pictures and furniture throughout the State Rooms. There are unusual touches too, such as Norman Tulip’s walking stick collection, with intricately carved handles of climbing mice, or birds with beaks curving back. The family cat strolls around the castle demanding attention from everyone he meets. Posing for anyone who points a camera in his direction!

There are many unexpected sides to castle life which are highlighted by the guides. A tunnel under the courtyard leads from the kitchen to the State Dining Room. In bygone days, staff had to whistle all the way along the corridor when they were carrying meals to the dining room – it was only wide enough for one person at a time.

Statues stand poised on the numerous turrets, many of which date back to medieval times: It is thought that they were designed as decoys against attackers. A great moat surrounds the castle: No longer full of water, its deep grassy banks are popular with visitors following the path of Hagrid, Harry, Hermoine and Ron into the woods. 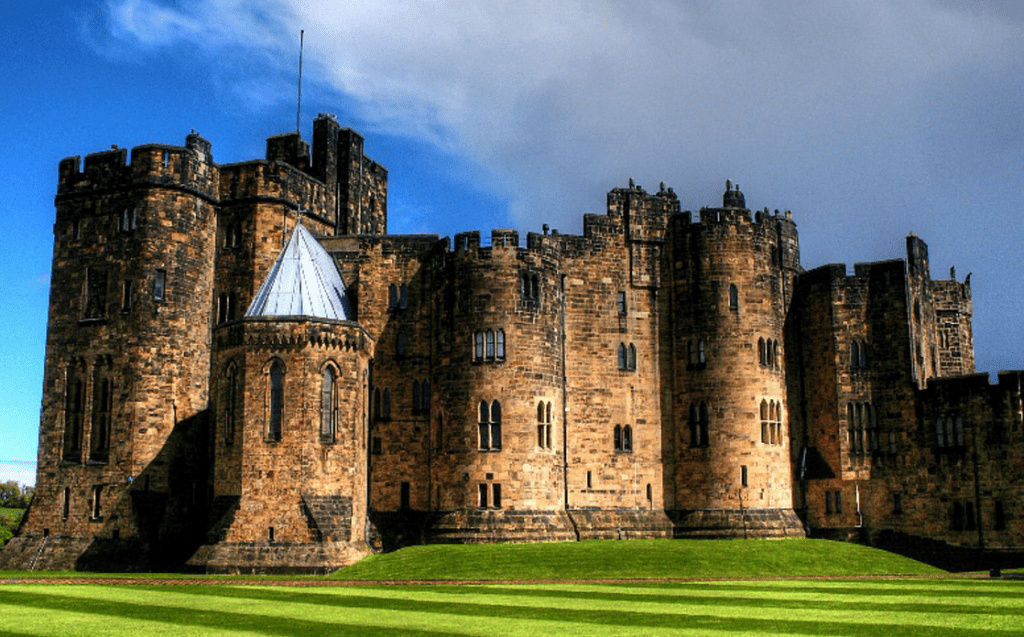 Equally unmissable are the Alnwick Castle Gardens. Created by the Duchess of Northumberland, these attract thousands of visitors each day. There is a maze of flowerbeds; trickling streams and unusual water features where you are prone to be caught unexpectedly under a waterfall; and the Poison Garden.

Kept behind locked gates and only entered as part of a guided tour led by the gardener, this contains plants which can be deadly: everything from oleander to rhubarb leaves, cannabis to ivy. 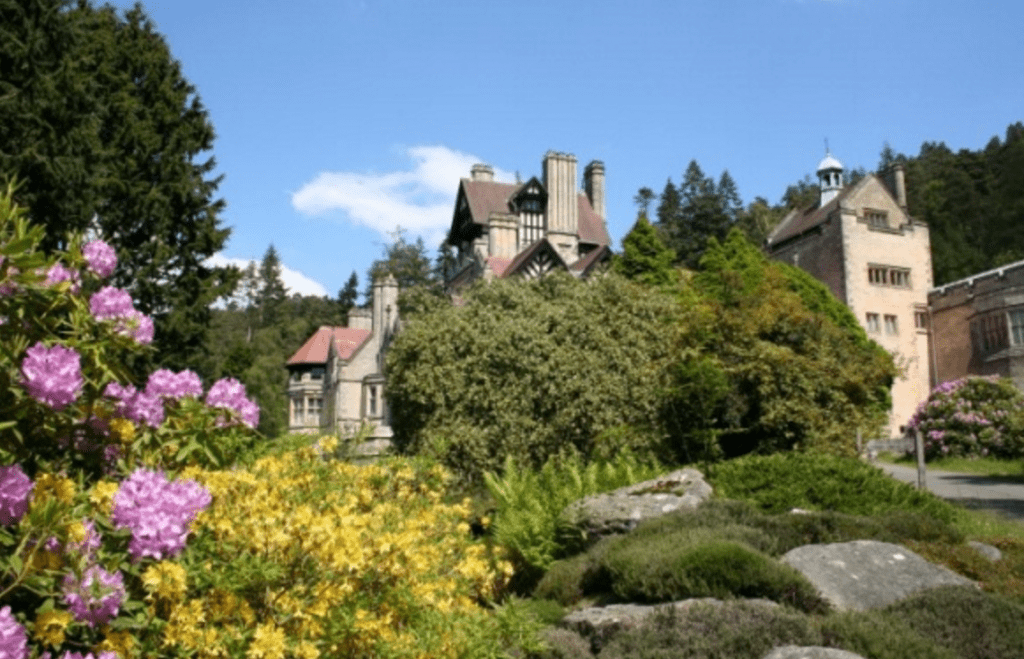 The tales told, such as the incident of French POW’s using the stems of Oleander to barbeque meat, are fascinating. In this instance the toxins from the stems passed into the meat during cooking caused 7 to die; 5 survived. This is a garden all about death and seems almost eerie, with the sound of children playing in the Grand Cascade waterfalls, so close behind the high wall. 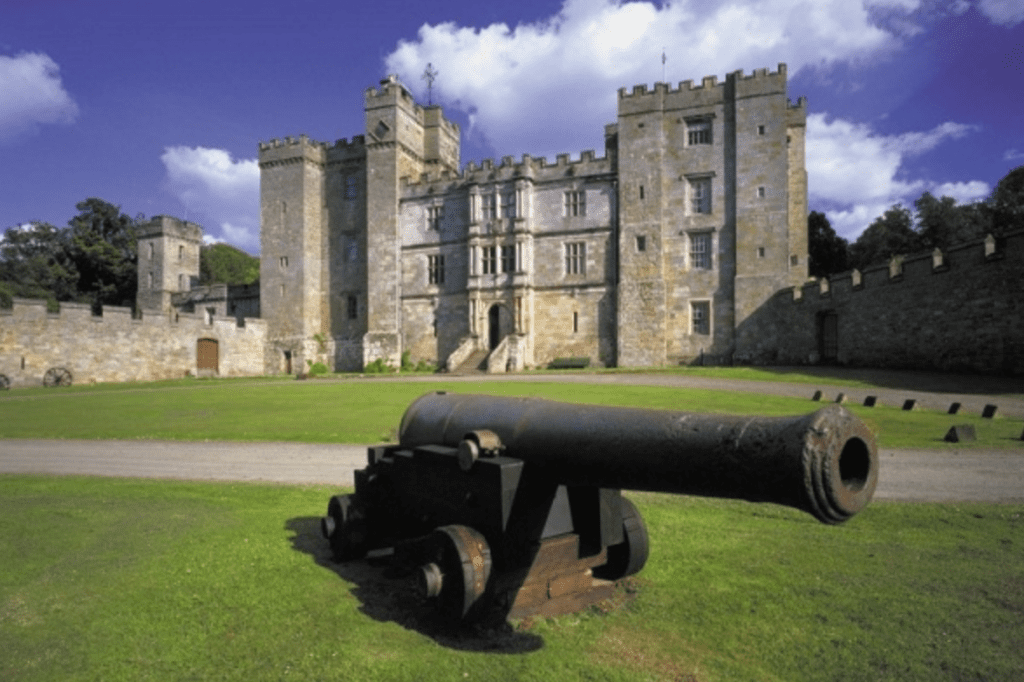 Northumbria has many beautiful stately homes to discover such as Belsay and Cragside with stunning rock gardens and the first house to be lit by hydroelectric power back in Victorian times. For a more chilling experience try the twelfth century stronghold known as Chillingham Castle which is said to have more ghosts than any other castle in the country. 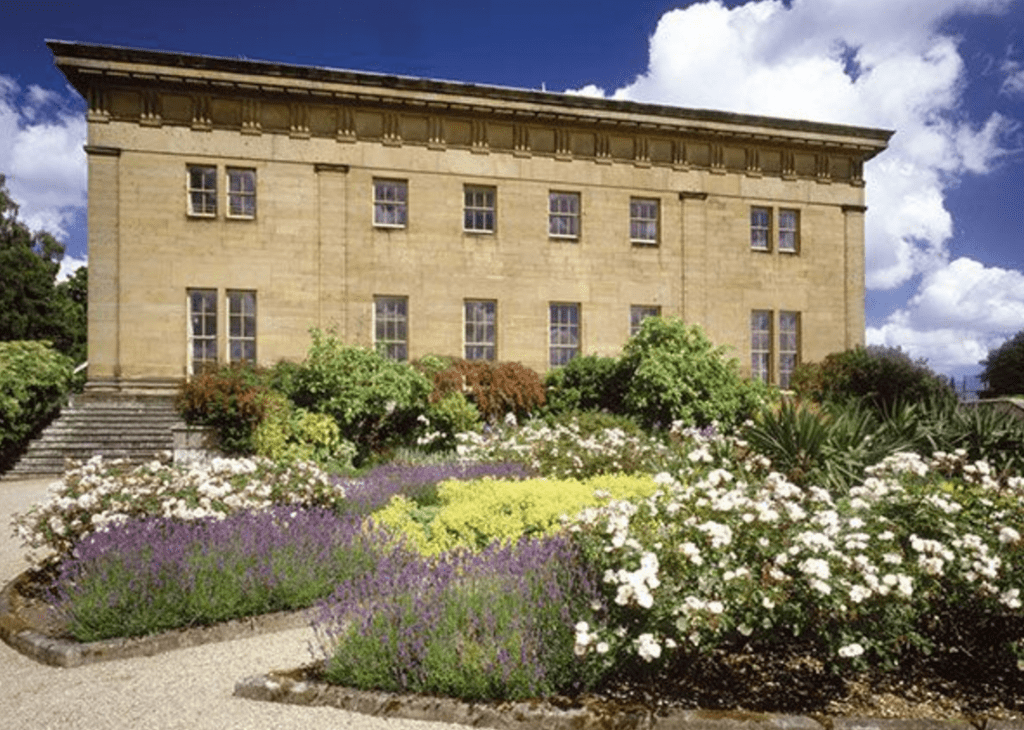 Exploring further afield there is the beauty of Lindisfarne – but you have to watch the tide! Lindisfarne is an island, accessible only by a causeway at low tide. Stay too long and you are trapped! It was its remoteness that appealed to the monks who first settled there many centuries ago. Standing in the remains of the great Abbey, with its spectacular Rainbow arch, it is easy to see why so many people still come on pilgrimages today. Serene and intensely peaceful, with the sound of seabirds and seals echoing around the bay; it has an unworldly beauty.

Lindisfarne Castle is also worth a visit. Climbing up a steep, winding path leads to a lovely fully furnished castle complete with a ship sailing across the ceiling of the dining room. Telescopes on the roof encourage visitors to enjoy close up views of the seals on the sandbanks. 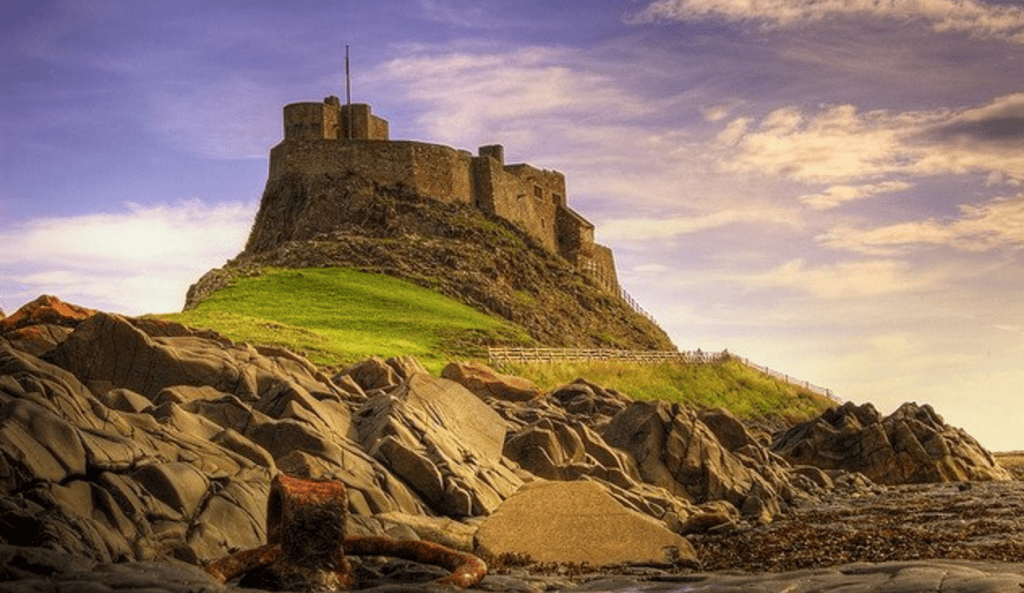 Back on the mainland, Bamburgh Castle looms up high above the coast complete with reminders of the aircraft manufacturer which once lived there. Below the castle, is a long, beautifully golden beach, perfect for strolling along and relaxing upon.

Berwick upon Tweed is the last northern town in England before you reach Scotland. Ownership of the town has changed hands many times over the centuries, leading to the development of a series of incredible fortifications. 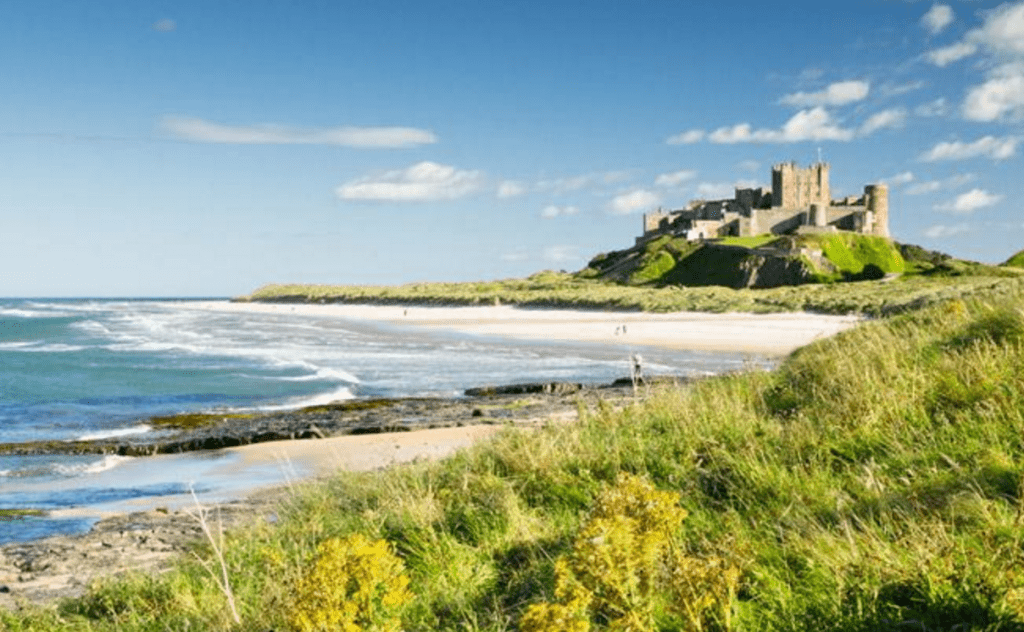 Even today, the Berwick Ramparts form a massive barrier around three sides of the town. Climbing the steps beside the great gateways leads onto a large grass covered park – it is only when you reach the edge that you discover the massive drop on the other side. Sloping sides hid the steep walls and gun emplacements that were nigh on 20 feet high. It takes a good hour to walk around the entire circuit of the ramparts and the views are superb.

Just beside the Ramparts is the Berwick Barracks, one of the first to be set up anywhere in the UK.

Established in 1721, it provided an answer to the problem of trying to billet soldiers on an unwilling population. We were amused to discover that many inn keepers promptly ceased trading as soon as soldiers moved into their area since they did not want to be faced with the problem of housing them. The costs were quite high as the innkeepers had to provide food, drink, stabling, eating utensils, salt, small beer and candles: Their profits were non-existent.

Berwick itself is a very pretty town, friendly and relaxed, consisting of a high street that has not been taken over by the big retail chains. Instead it is very individualistic; befitting a county which is one of the very few to have its own distinctive red and yellow flag.

THE ULTIMATE MECHANICAL CHRONOGRAPH
No comments

Everything You Need to Know About Takbeer Tashreeq
No comments

9 Best Espadrilles For Men
No comments