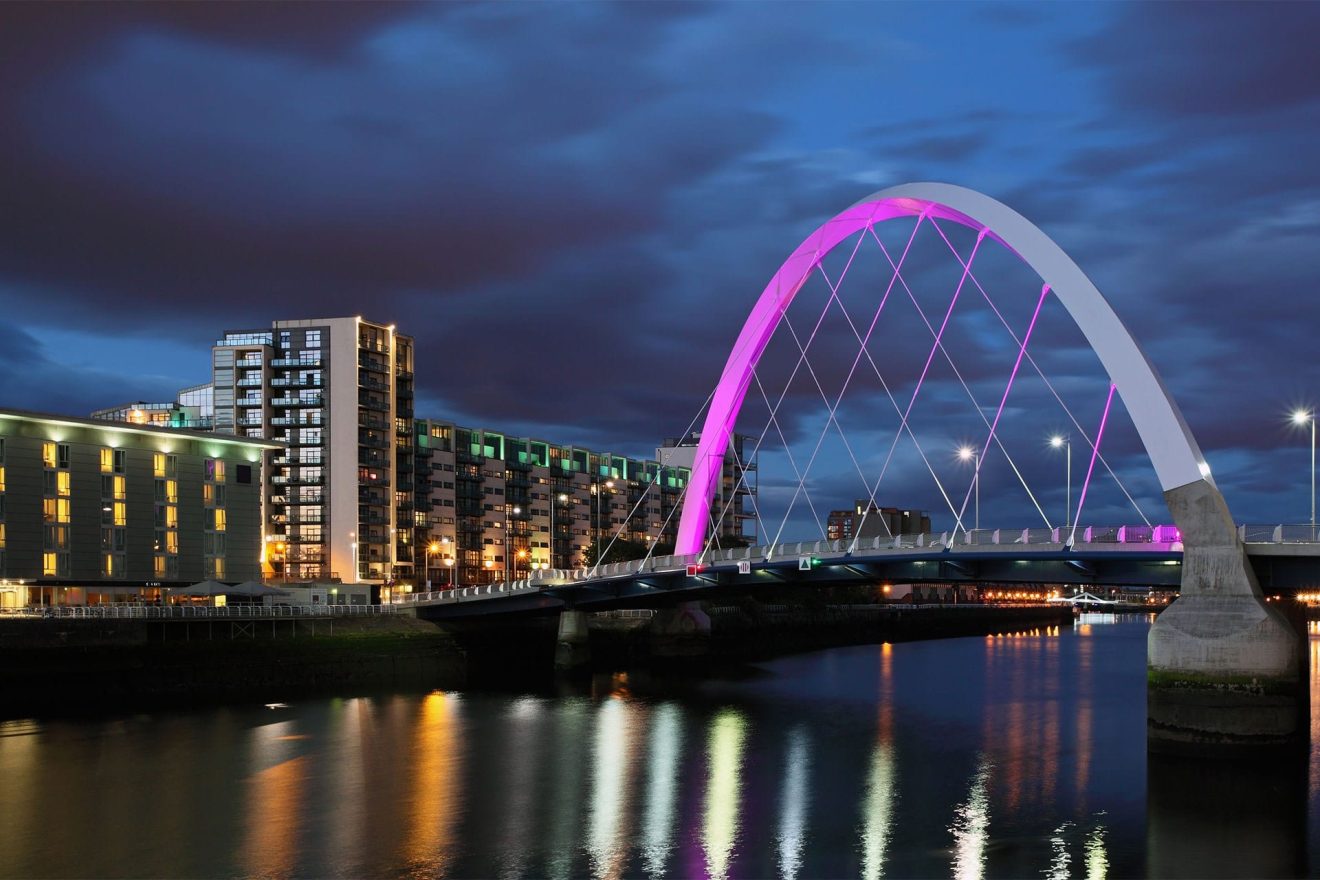 Glasgow was known as the second city of the British Empire for much of the Victorian and Edwardian period. Today, the Merchant City bustles with shops and has a thriving cultural scene

Like all amazing cities, at the centre of Glasgow is a river. From its source in Leadhills to the south east, the Clyde flows down through the old mill towns of Lanarkshire, bending west and widening as it snakes past the sites of the shipyards which made Glasgow the Second City of the British Empire, on to the tail of the bank at Gourock, where drovers swam their cattle on the final lap of the long journey to market from the Highlands. A sharp turn and the Clyde is on its final stretch past the quaintly pretty seaside towns of Largs, Dunoon and Rothesay where Glaswegians spent their ‘fair’ holidays. The history of Glasgow and the course of the Clyde are inextricably linked.

It all started back in the 6th century, when St Mungo built his monastery on a tributary of the Clyde called the Molendinar Burn. The cathedral named for him occupies the same spot today, crouching in Gothic splendour in the lee of the Necropolis, where John Knox, the founder of Scottish Presbyterianism, glowers over the city, stern and disapproving. St Mungo’s miracles are commemorated in the bell, bird, tree and fish of Glasgow’s coat of arms, along with his prayer to “let Glasgow flourish”. Thanks in no small part to the river that brought St Mungo to settle there, flourish is exactly what the city has done.

In 1707 the Union of the Scottish and English Parliaments granted Scots access to the colonies in North America and the Indies, triggering a period of rapid expansion.

For over a hundred years, the shipbuilding and engineering works that made Glasgow great jostled for space along the Clyde. The city expanded rapidly, demonstrating its status in the magnificent civic buildings erected at the time, the most opulent of which is the City Chambers on George Square. A few steps from here in the city centre is Central Station, a stunning creation of glass and wrought iron, the departure point for the thousands of industrial workers seeking respite from the hard slog of factory life by going “doon the watter” to the Clyde Riviera.

The Industrial Revolution brought immense wealth to Glasgow. It also brought smog. For those who could afford it, a move to the West End, where the prevailing winds blew the pollution away, was essential. The University of Glasgow, which relocated from its original site near the cathedral to Gilmorehill in 1870, is a lovely place to wander round, with atmospheric cloisters and quads and an excellent view out over Kelvingrove Park, where the newly refurbished Kelvingrove Museum is situated. Here you’ll find Salvador Dalí’s Christ of St John of the Cross, as well as Glasgow Boys, Scottish Colourists and an eclectic collection of exhibits from armoury to stuffed aardvarks, housed in a baroque Victorian building which is one of the most-visited attractions in Britain, outside London. Once you’ve had your fill of culture, there’s the calm of the Botanic gardens with the restored Kibble Palace Glasshouse, or the vibrant ambiance of Byres Road.

1999 saw Glasgow named City of Architecture and Design. One of its most illustrious buildings, tucked away behind Sauchihall Street, is Charles Rennie Mackintosh’s School of Art, which celebrated its centenary in 2009. It’s an iconic structure, deceptively simple and intriguingly complex, a stunningly effective example of Mackintosh’s ambition to create clean lines and practical, naturally-lit space.

Glasgow really is a multi-faceted city, locals welcome visitors and take justifiable pride in the treasures their city has to offer.

At 127 metres high, the tower at the Glasgow Science Centre holds the Guinness World Record for the tallest fully rotating freestanding structure in the world. This colossal structure will now see public access granted to its viewing cabin in time for the Commonwealth Games to be held in the city on 23 July to 3 August. When a series of problems with the tower’s lifts led to its closure in 2010, the resulting refurbishment project has seen the addition of new lifts, a new interactive visitor experience area at the base of the structure, as well as new technology in the viewing cabin where visitors can learn more about the history of Glasgow before enjoying the 20-mile views of the city at a height of 105 metres.

Dr Stephen Breslin, chief executive of the Glasgow Science Centre, said: “We are excited to return Glasgow Tower back to the city. It is an iconic landmark along the River Clyde and a world-class feat of engineering.”

Welcome to the world of Faiza Samee
No comments